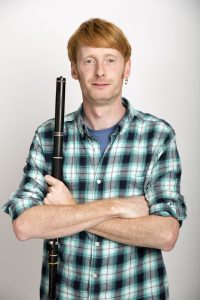 James Mahon is ten times All Ireland Champion Flautist and Uilleann Piper with first class bachelor and
masters degrees in music. He has been at the forefront of the traditional Irish music scene for over 17
years. He has collaborated, performed and recorded with some of the most significant figures in Irish
and world music such as Ronnie Drew, Donal Lunny, Iarla Ó lionard, Michael Mc Goldrick, Steve Cooney,
Ódhrán Ó Chaiside, Séan Ó Sé, Moya Brennan, Xose Manuel Bundino, John Spillane, Imelda May ,
Mundy, Steve Lynch and was a member of the Grammy nominated Afro Celt Sound System from 2010 –
2017. He has been selected to perform at many state occasions including Queen Elizabeth II’s state
dinner in Dublin 2011 and for President Barak Obama on his visit to Ireland in 2011.

Since 2003 he has been teaching music, becoming swiftly recognised and teaching All Ireland medal
winning students. He has given lectures at the DIT Conservatory of Music and Drama, from where he
received his Bachelor’s Degree and has thought at the prestigious Irish World Academy at University of
Limerick, from where he received his Master’s Degree. He has also thought at recognised festivals and
workshops globally such as ‘Willie Clancy Summer School’, Scoil Éigse, Meitheal Tradweek and Festival
Interceltique de Lorient, France, Creative Connexions, Sitges, Spain. He is currently a tutor with Music
Generation Wicklow, an ensemble director and tutor with Music Generation South Dublin. He has
worked with ‘Reelig’, The Traditional performance group from Music Generation Carlow on
Collaboration with Dancer David Geaney that was performed at Creative Connexions 2017.

James has travelled the world bringing Irish music to different cultures. He has been to Europe, Asia,
Africa, North and South America, Russia and Australia. Most recently he has been touring, writing and
recording with Oscar nominated band Kíla. He has worked with IFTA nominated film composer Steve
Lynch on the TG4/ Smithsonian Institute documentary “Sacred Sites of Ireland”. He has established
Comhaltas in Brazil in spring 2018. He Recorded with Nashville producer Fred Williams for ‘Built By Titan’
and he has composed music for a modern dance performance piece for Maureen Fleming and it will be
performed in New York in Autumn 2018.